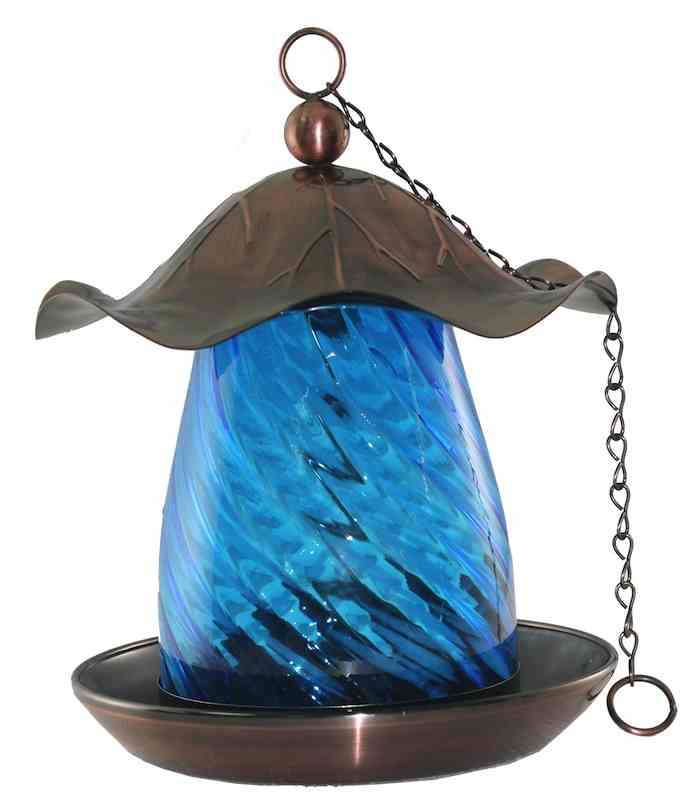 We counted on Monday, the last day for the 2014 Great backyard Bird Count. Had the event been last week-during the ice storm, more species would’ve been recorded. A warm sunny day saw a bit less activity at feeders than the first half of February when treacherous weather brought a slew of new visitors to this North Georgia yard. But with this warmer weather and the first glimpse of spring… a new glass bird feeder or two always helps to celebrate!

Stationary, the count was limited to the backyard where most of our feeders and baths are placed. Superior habitat occurs with mature pines, shrubs and hardwoods. By the way, the greatest benefit to glass feeders is the non-porous surface. Bacteria and mold can not penetrate surfaces like wood, this makes them healthier for birds. Plus they’re much easier to clean.

But back to the count: Again this year, participation increased over last with 131 countries reporting checklists, as opposed to 110 last year. Although data is still being entered, here’s a brief overview of country, number of species reported, and the number of checklists for that country. Pretty impressive!

Cornell’s data won’t be complete until the end of the month, but they’ve listed some noticeable trends:

Fewer Finches
After last year’s “superflight,” this year’s GBBC reports for 10 irruptive species (mostly finches) are down considerably. This includes reports for the White-winged and Red crossbills, Common and Hoary redpolls, Pine and Evening grosbeaks, Pine Siskin, Purple Finch, Red-breasted Nuthatches, and Bohemian Waxwings. These are believed to be natural fluctuations in numbers because of variation in seed crops.

Snowy Owl Invasion Continues
A massive irruption of Snowy Owls into the northeastern, mid-Atlantic, and Great Lakes States of the U.S., as well as southeastern Canada, is easily seen in GBBC numbers. Preliminary results show participants reported more than 2,500 Snowy Owls in 25 states and 7 provinces of the U.S. and Canada!

The Polar Vortex Effect
The frigid cold in many parts of North America has resulted in unusual movements of waterfowl and grebes. With the Great Lakes almost completely frozen, some species, such as the White-winged Scoter and the Long-tailed Duck, have fled the frozen lakes and stopped at inland locations where they are not usually found at this time of year.

You can still count birds!
Project FeederWatch is a winter-long survey of birds at your feeders. The lab is offering a 2-for-1 to join this fun project now.

You can always count birds!
Anytime, anywhere in the world you can report bird sightings through eBird. Use the same user name and password you used for the GBBC and keep on counting at eBird.org.
The Cornell Lab of Ornithology is a nonprofit membership institution interpreting and conserving the earth’s biological diversity through research, education, and citizen science focused on birds. Visit the Cornell Lab website at www.birds.cornell.edu

Audubon is dedicated to protecting birds and other wildlife and the habitat that supports them. Our national network of community-based nature centers and chapters, scientific and educational programs, and advocacy on behalf of areas sustaining important bird populations, engage millions of people of all ages and backgrounds in conservation. www.audubon.org

Bird Studies Canada administers regional, national, and international research and monitoring programs that advance the understanding, appreciation, and conservation of wild birds and their habitats. We are Canada’s national body for bird conservation and science, and we are a non-governmental charitable organization. www.birdscanada.org