It’s been a strange season for birds in general due to the lengthy winter weather. Because some parts of the country were still seeing snow in late April and early May, mortality rates among nestlings were higher than usual. Colder than normal temps along with scarcity of natural food sources may have also accounted for some unsuccessful migrations of favorite feathered friends like hummingbirds. Many folks have reported seeing fewer of these sprites around feeders early in the season this year.

On the flip side, resident birds whose nesting season is about over, are attempting later than usual broods. Many blue bird houses which have already fledged two or three sets of nestlings are seeing their third and even fourth clutch of the season! This is all wonderful news for bluebirds… except for the searing temperatures July and August can bring.

If it’s hot outside, guaranteed it’s hotter inside a birdhouse. Babies can not regulate their body temperatures until they reach a certain age, but there are a few things you can do to help bluebirds (and others) beat the heat. First and foremost is to keep blue bird houses out of the sun, especially that baking afternoon sun. Moving a box a few feet where it’s shaded in the afternoon makes a difference in the ambient temperature inside the box. To featherless nestlings, just a few degrees can mean the difference between life or death. Birdbaths and Leaf Misters also help birds cool down during extreme heat. Parents will even shake themselves over babies dripping a bit of water to cool them.

Crazy as it sounds, there are other ways to cool down blue bird houses. Setting an ice pack or two on top of the house, attached with a large rubber band or bungee will help to cool temps inside. Recent discussions revealed a few folks putting up umbrellas to shade their nest boxes, again attached with bungee cords. Last summer we even wrapped our 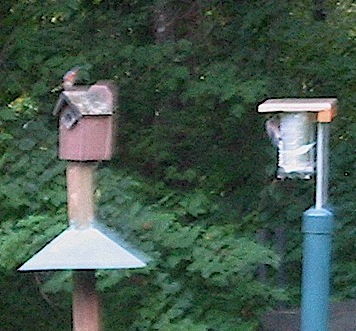 Gilbertson nest box with a heat shield – the kind used for car windshields! Easy to measure, and simple to cut, duct tape and rubber bands held the soft shield securely in place. The blues didn’t mind it all, and it helped their digs and babies stay cooler. Four fledged in mid-August of 2012. Stats like these mean it’s not too late to offer bluebirds housing. At the very least, you may be providing a nightly winter roost for other resident birds.

The image isn’t so great, but you can see the foil-like cover on the round blue bird house to the right. It literally took five minutes to complete this easy project, and may have helped save four babies from succumbing to horrid heat.