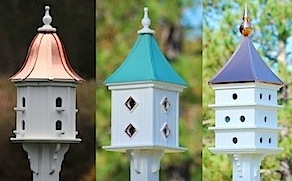 They’re fairly large, actually big, so how could one of these just disappear? The mystery began two months after it shipped, when tracking showed delivered, but Teresa insisted there was no package.

And why would one wait that long anyway? A Mother’s Day gift that shipped in May, the issue hadn’t come to light until July! When her kids kept asking if she received the copper roof birdhouse, Teresa was just too busy with more pressing matters.

So when she finally called us, but FedEx insisted it was delivered… we were a bit befuddled. Teresa said they’ve never had anything stolen from the porch, and that you can’t see the residence from the street because the driveway is 300 feet long. Needless to say we drove the FedEx rep crazy with requests for a claim. Nightmare.

Then one day we received a package out of the blue, but no, it wasn’t the birdhouse. It was one pound of Michigan dried cherries, three jars of some outlandish hot fudge, a box of french soap, and a really nice card… from Teresa! Turns out the birdhouse was there all along, but she thought it was the high chair she had ordered for her grand daughter. It wasn’t until the big company selling the chair notified her that it was out of stock – two months after she had ordered it. The light went off… she had her birdhouse all along. For our troubles (and oh there were several) she sent us a gift, along with a phone call and explanation. What a huge relief! 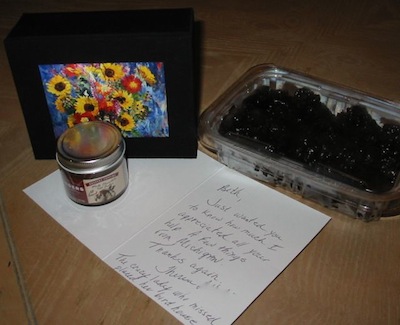 It’s not the first time we’ve actually received gifts from our customers. Because we’re small, we do much more than just sell a birdhouse. We make it an experience, by personalizing things, following through and knowing our customer is thrilled. From the largest copper birdhouses… to the smallest chickadee house, that’s just how we believe business should be done.

The dried cherries were to die for, and the other two jars of fudge? Long gone before the pic was snapped!