rds covet mealworms, in fact, I’ve discovered that lots of birds love these tasty morsels. In trying to attract bluebirds to this North Georgia yard, first came the bluebird house…but no luck. Then came a bluebird feeder, you know, the kind with the entrance holes that supposedly only bluebirds will fly into for food. Unfortunately that didn’t seem to work either, every different “bluebird delight” on the market was used.

After some quick research, it seemed live mealworms would do the trick, so I squeamishly ordered the first batch. They weren’t too bad, as long as I didn’t have to touch them! Unpacking and storing that first batch was pretty funny looking back at it now. Newspaper spread on the counter, latex gloves, and a semi-faint heart about the whole thing. Then just knowing I had a container of live worms in the fridge…omg! But I wanted to see bluebirds – so I persevered.

Not only did it work, it worked great…Eastern Bluebirds in my yard finally. Two or three showed up at first, and then they began to build a nest in the house. Watching the daily activity was fantastic. A few weeks later the babies started to fledge, one, two, three, four of th 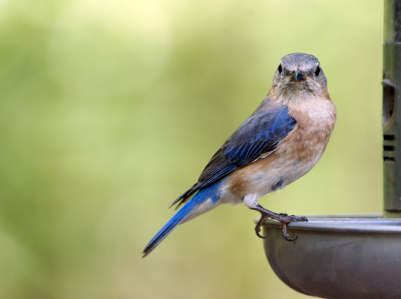 em, all following mom and dad. Truly a great season! It didn’t take long for them to figure out how to enter the mealworm feeder and retrieve their own worms at will. The coolest thing is there was a second successful brood that season too. Watching the juveniles with the new fledgelings was absolutely awesome. Now I’m addicted to meal worms just as much as my bluebirds are. Making sure to feed them twice every day, close to the same time. My new friends stuck around all winter, likely due to the three heated birdbaths, and the regular feeding schedule.

Traditional bluebird feeders aren’t the only way to offer mealworms to feathered friends. Many dish-type styles have attachments for poles, making it simple to add a mealworm feeder to any existing feeding station. Tray type or platform feeders also have the capacity for worms, but there’s no guarantee the bluebirds will get them first. Maybe that’s where the saying “early bird catches the worm” comes from?

This recycled plastic mealworm feeder easily mounts to any standard one-inch diameter pole. The wooden Siamese Cat has a metal screen tray that’s perfect for offering worms too. The best part about these types of feeders is versatility. Foods like suet, peanuts and fruit may also be offered, depending on the species you’d like to attract and season.