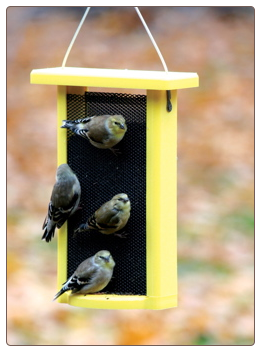 The unseasonably warm December weather in the eastern US seems to be drawing to a close- giving way to more normal, colder temperatures. In the southeast, some thought it an appropriate time to start building the ark… as the rain just would not stop.

Take all that rain combined with extreme warm temperatures and think about your bird feeders for a moment. Yuck! Plain & simple… a four-letter word for a nasty, damp, moldy mess 🙁  With consistent rains, it doesn’t even matter if you’ve just cleaned the feeder well, or scraped the mold off suet because the nasties come right back. Oh, and the smell? If you can smell the seed, chances are about 99.99% the seed is spoiled.

Although birds have no sense of smell, they do have the smarts (for the most part) to stay away from spoiled seed. But here’s the kicker: with temperatures dropping to freezing and snow already falling in many parts… flocks of finches and pine siskins may appear at nyjer feeders overnight.

Famished, freezing and in dire need of energy (calories) to sustain themselves overnight, many of these finch-like birds may partake in whatever is being offered. If your feeder happens to be serving moldy seed, it’s a recipe for disaster among these local flocks. Even if you can’t see the green, white or gray stuff, birds ingest and pass these mold spores which are usually fatal. Generally referred to as respiratory disease or salmonella, the bacteria may have several names, but all pretty much cause a slow and painful death and or blindness resulting in starvation and predation.

Sick birds appear lethargic, allowing you to get too close for comfort. They cling to feeders (whether food is fresh or old) and

their eyes may be swollen, or even shut. Their bodies are puffed up, but it’s a different stance than when healthy birds are just trying to keep warm. Affected birds may rock, or even shake depending on the severity and stage of disease. At this point it’s the feeders themselves spreading the disease, not just the sick bird, and that’s where the tragedy lies.

Feeders must be taken down, bleached and not returned for use for at least two weeks or until the flocks disperse. The ground below feeders must also be cleaned up, even moving a hanging feeder or placing a feeding station on clean ground is a good idea. It’s an awful lot of work, and your heart starts breaking when there’s snow and birds are calling for their food. But the alternative is far worse, with one dead bird, a few dead birds, and eventually a whole bunch of fatalities around the landscape. 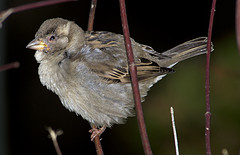 In our yard now it’s almost impossible to clean the ground below feeders as there are virtually puddles and mush everywhere. Since we’ve been through this ordeal once already, it looks like New Year’s Eve (day) will be spent cleaning feeders and probably moving them around the yard. First we’ll check the weather, and should the forecast call for more rain… maybe we’ll start the ark instead!

But in all seriousness, please keep bird feeders and feeding areas clean. Because we attract these birds in an unnatural setting, it is solely our responsibility to promote healthy feeding areas.