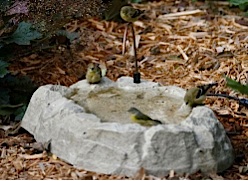 The Rocky Mountain ground bath with dripper is pretty cool, birds actually sit and wait for it to start in the morning… but it no longer sits on the ground due to man-made predators 🙁

One of the oldest and most intense arguments… cats vs. birds and there’s basically two sides; birders and the people they refer to as “cat crazies”- those who let their cats roam because they believe it’s good for them. Ferals who roam are a problem for birds (but that stems from human ignorance too). Still, there are birders who are responsible cat owners and keep their feline friends indoors. We fit this category – four cats, whose outdoor time consists of a screened porch, and they’re pretty happy with the arrangement.

The neighbor “rescues” cats from the shelter, but they stay outdoors for the most part, which drives me bonkers! At times it’s infuriating, heated words have been exchanged on several occasions. The husband says “just shoot the cat”, but truth be told, I’d rather shoot the wife because it’s not the cats’ fault! Suggesting the cat sport a collar with a bell worked, but it really doesn’t help the birds too much.

A couple of cool ground bird baths are always in use around our yard, but they’re not on the ground anymore! This stinks because birds tend to bathe more naturally at this level. Enter tree stumps, large planters, small tables, and anything else that will add height to the bird baths. An excuse to add yet another, hanging style too.

The dripper birdbath now sits  atop of a large planter, the big wood textured bird bath will look good on a tree stump, and the birds will definitely adjust in a day or two at most. Would’ve much rather kept things status quo, but it’s really not fair to the birds. Their lives needn’t be compromised due to the neighbor’s stupidity! And hey… one more hanging bath to maintain won’t make a big difference in the scheme of things… especially since we’re already known in the neighborhood as the crazy bird people 🙂 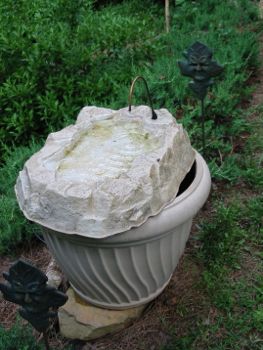