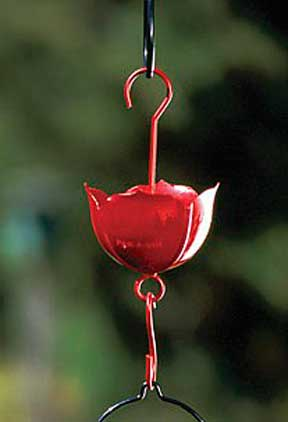 Well of course I was sans the camera when a Titmouse landed on the bracket where the hummingbird feeder hangs. Above that is a moat to keep the pesky ants at bay and out of nectar. The bird hopped down and perched on the moat, drinking, drinking and drinking again. After this incident I kept a closer watch, and noticed other small songbirds had the same idea.

It seemed strange to me because there are nine birdbaths, two misters, and one fountain around the place! Yes, it’s a job in itself taking care of everything in the yard, but when you’re a backyard bird fanatic… these things happen!

Luckily the afternoon storms have started in the Southeast, bringing rain, wonderful rain! “Crunchiness” is turning green, and plants are looking much healthier. I wish for all drought-stricken areas the rains would come. Even on Facebook, I’ve seen rain dances and rain prayers throughout the daily feeds.

Now usually when it’s hotter than Hades out there, a few drops of salad oil are added to the water inside the ant moat. This addition to the moat water helps to slow evaporation. But after discovering birds drinking from the smallest birdbath in the world… we had to nix the oil.

Be kind to birds and wildlife if your area is parched. Simply placing a shallow bowl or pan of water on the ground will make an excellent refuge for many crawly, winged, or other wild being!