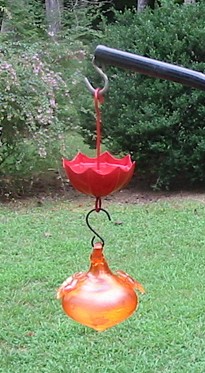 “Every day, every single day I’m changing the nectar because of ants” my friend said in desperation. Insisting if she’d just use an ant moat, the problem would be solved. She kept saying her feeder had one, to which I replied “then keep it filled”. When she told me “you can’t” – I then insisted “then something’s upside down!”

How frustrating because it’s a fairly simple principle… ants won’t cross water because they never took swimming lessons. Gathering two moats and a new glass hummingbird feeder she had her eye on, it was time to see the moat that couldn’t be filled, it piqued my curiosity.

Upon seeing the cheap plastic feeder (it’s okay, we use them sometimes too) it was absolutely moat-less. “There’s no moat, that’s why the ants keep getting to it”. I showed her the little cup-shape moat, said to fill it with water and hang the hummingbird feeder directly below. 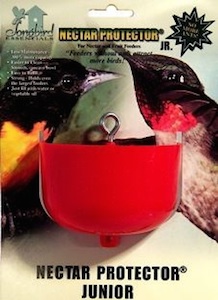 It was like a light went off, and a clear understanding was now obvious. Why would we even mention it? Because everyone starts somewhere when feeding the birds. When you’ve been doing it for 30 years or so, much knowledge is gained as to what works and what doesn’t. The hobby’s become wildly popular in the past few years, which means there’s a lot of folks who are fairly new to backyard birding.

Everyone loves hummingbirds, they’re one of summers’ highlights, but ants can ruin the experience quickly… for the tiny sprites too! It takes just one pesky ant to sour a feeder full of fresh nectar – and that’s a bummer. They must emit something terribly fowl to hummingbirds? 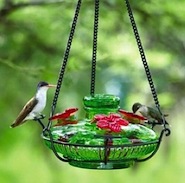 Save your nectar and your money by using a moat and making your own sugar-water solution. It’s SO easy and really fast, no red dye needed. Table sugar and water at a 1:4 ratio… that’s it! No other ingredients as they’re harmful to the birds. During migration, the nectar can be a bit stronger at 1:3, the extra calories serve the birds well for their long journey ahead.

Oh yeah, and the pretty glass feeder was an instant hit with her hummingbirds, she said it took about four seconds before they discovered it and started feeding!