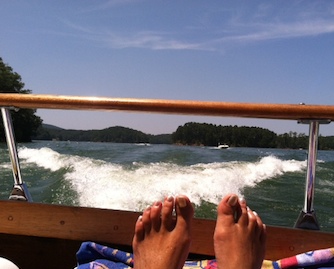 A few weeks ago on a much welcomed boating excursion, we anchored in a lovely cove for the evening.  As dusk approached, the sunset and simple stillness were truly amazing. That is, until the bats came out… then it was funny!

Dive-bombing only my friend’s husband, “they’re harmless” and “it’s nothing” was the advice offered in between belly laughs. 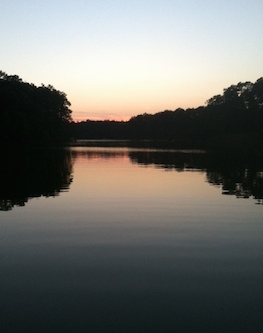 Fast forward to this weeks’ event:

The incident started around 3:00 A.M. and ended roughly two hours later. Awakened by a “thump”, some fluttering and odd noises, I remembered the bathroom window (facing a wooded yard) was left slightly cracked sans the screen. One inch, it wasn’t wider than one inch – but enough for the little guy to get through. If you can roll your tongue with no vocals… that was pretty much it, like a low, soft motor.

Jolted from a sound sleep “what, where?” The cats were absolutely beside themselves, all I had to do was look in the direction of their interest. Then I spotted him, frantically flying from room to room, downstairs, upstairs, back and forth! The only audible was flapping wings and occasional fowl language when he flew directly overhead.

The wingspan was big, how did he get through that window, and why? This ain’t no bat house! What could have possessed the flying mammal to enter? A predator? Are bats territorial? Do owls eat them? They’re the only other nocturnal predator in the area, hey, I’m the birdhouse chick, not the bat lady!

It was evident the little guy was growing tired of all the commotion as well, he began perching/hanging from the ceiling in the bedroom. Of course this had to be in the vaulted part where nothing I had could reach him! With my nerves starting to finally settle, and realizing that pulling the sheets over my head wouldn’t solve anything, the plan was devised.

The bathroom-open the window all the way and get him back into the room from whence he came. Shut the door and he’ll figure it out with sounds of the great outdoors. Twice the opportunity presented itself and twice I failed, not fast enough for him. With stronger resolve, the third time was a charm. Done! His movement was still detected a few minutes later and then silence – he made it out alive… or at least I had hoped.

Waiting until daylight I opened the door slowly to be sure, no signs. Checking all possible nooks and crannies where he could’ve possibly dropped dead, I was convinced he escaped… it was awesome except for the next task at hand.

Bat guano detail… omg! It’s an innate habit of all living beings, a universal law of nature… poop when nervous. Droppings were found in every room of the house – but hey, at least it’s not liquid like bird poop, right?

So there it is, because I laughed at my friend while being dive-bombed by bats on the lake, karma came back tenfold. Literally Bat Sh*t crazy, ay?