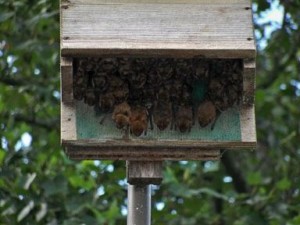 Forget the pesticides, they’re literally choking the planet, and with the mild winter we’ve had, you can count on an extremely buggy summer! Because the ground never underwent an extended hard freeze, every creepy-crawly, buzzing and flying pest will witness a bumper crop season! A real nuisance for those who love the outdoors, but it doesn’t have to be….

Birds eat bugs, and bats eat more bugs – by the thousands per night! Although fuzzy, brown bats may appear a little on the eerie side, they are one of the most misunderstood flying creatures of the planet. Actually considered mammals, bats are essential to our ecosystem. Critical, bio-diverse services performed not only include insect control, but pollination and seed dispersal as well. In just about any given habitat; cities, deserts, woodlands, grasslands, rain forests, and your backyard, bat houses provide roosting spots for these beneficial flying mammals. Mounted high on a pole (15 to 20 feet) or on the side of a structure, bat houses will entice permanent residence if habitat is suitable.

The Center for Biological Diversity has published some astonishing numbers as far as bats’ value to farmers. The major concern is the quick-spreading White Nose Syndrome disease which has decimated entire bat populations in the last few years. Emerging in the Northeast, the fatal disease has spread south and west, wiping out complete colonies of cave-dwelling bats.

“Nationwide the loss of bats could mean exploding populations of insects no longer kept in check by these furry, fly-by-night mammals. Scientists have estimated that by keeping insect pests at bay and reducing the need for pesticides, bats are worth $22 billion annually to American farmers. In Colorado, these savings could reach $430 million per year; in South Dakota, $1.1 billion.

While bats are dying at rates topping 90 percent in some areas, and some species could face extinction, the risk to western bats and farmers is too great to justify easing restrictions for discretionary cave uses like recreation.”

The Center is asking for everyone’s help in protecting western bats, and preventing the spread of the deadly fungus. Simply keeping caves closed (nature’s bat houses) to tourism is a simple step in protecting bats and thwarting the war waged against their extinction.

Please take one minute and sign a letter to the U.S. Forest Service, asking for responsible management by maintaining current laws to keep bat caves closed to tourism.