Tired of lamenting over the neighbor’s cat, I decided to ask an expert birder if he could identify the predator by the formation of feathers left below the feeder. It’s a groovy tube bird feeder in a mod design that accommodates thistle or sunflower seed, ours is filled with the latter. Varied species frequent it, and even though cat birds don’t go for sunflower seed… I believe that’s who the casualty was in this case. 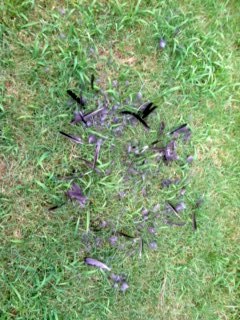 To me, he’s a wealth of knowledge on all things birding and nature related. Not sure if he’s blogging himself, or has ever written professionally, but his stories fascinate me.

So I asked Mr. Keith Kridler of Mt. Pleasant, Tx, if he could tell by the formation of these feathers, who was the predator here? Did it look like the work of cat or hawk? Even though there’s a 50/50 shot at the correct answer… he couldn’t tell me with 100% accuracy. He did however mention certain clues to look for, and that a bit of further investigation might reveal my answer.

The next day there was a post in the forum, which he so kindly allowed me to share. It makes for most interesting reading if you’re into birds! Check his view in the last sentence too, so true, so true Keith!

“Jack Finch, Bailey North Carolina would get up every morning about 4:30 AM and sit outside and enjoy coffee while listening to his bluebirds wake up. Bluebirds during the heat of summer are more vocal in the pre-dawn hours and each male will belt out territorial calls from their roost tree. By listening every morning, Jack could tell if something or more likely some predator had forced one of his pairs of bluebirds to shift their roosting locations. You can tell the “morning after” a brood of bluebirds has fledged, because that pair will NOT be calling from the nestbox location. They will be frantically calling and singing to locate all of their young that survived their first night out of the nestbox! This new location maybe several hundred yards from their nest! For the next week or so their normal “sunrise” songs will be controlled panic calls!

You can hear in the pre-dawn hours if you have a pair of bluebirds that are about to begin another nesting attempt. They will be singing and calling near their chosen new nest site. This is to warn other pairs away and or it might just be a new/single male bluebird trying to attract a female, since he is bragging about a new nestbox/new habitat that he is now holding. By sunrise any other nearby male bluebirds will fly to the edges of their territory and they will also fire up in song and there may be four or five different males singing their versions of “Dueling Banjo’s”.

You can locate them with the first light, as they will be in the tip tops of trees, right at the edge of their territory. They will be singing and wing waving, then warning chatter if another male or pair of bluebirds is too close. They will be bouncing up in the air about 10 feet, then sailing back down flashing their wings to show off their blue feathers. Colors are more intense just as the sun is clearing the horizon or about to slip down out of sight at sunset. On occasion there will actually be fighting, between birds, by July this morning ritual will seldom go beyond a short dash from the dominant male bluebird, chasing a challenger back a few trees. Maintaining “Pecking Order” in different species is fairly complex! It sometimes is even harder to adapt and or re-arrange pecking order in a group!

Think about when a Beauty Queen or Sports Jock moved into your small town from another state when you were growing up! Same goes for a new lead singer into a small church choir, or new management personnel at work or heaven forbid a political change! This is all “Pecking Order” issues that have to be worked through, in the birding world, the individual birds will settle this mostly by singing and bluffing. At some point in every yard this pecking order will change off and on all summer long.

Many of the bird/animal species have evolved to move and feed in “flocks”, by doing this they can simply crowd out the other non-flocking species while they dominate a food source. Big flocks and or groups have to constantly be on the move though, as they will deplete the food, water and habitat. Some people say that the “flock” of Passenger Pigeons was around 6 Billion strong and that there were more than 40 Million Bison still roaming freely across North America in 1814. These were replaced at the top of the Pecking Order with domestic chickens and cattle by 1890.

Currently there are about 210 distinct “Flocks” of Humans living behind temporary lines and fences. We live in interesting times as the Pecking Order of human flocks are changing at all levels it appears at the same time. Shame we don’t adjust this pecking order by singing and bluffing! At the worst we should send out our leaders to settle disputes one on one, more like two Bantam Roosters would.”