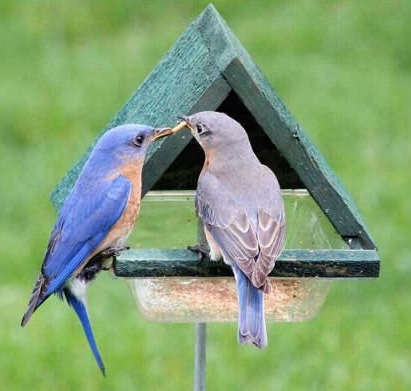 By the sound of the title alone, you gotta figure it can’t be good, but if the information educates just one person or raises awareness, then it’s well worth the time to write.

Simply put: pesticides kill. Not only do they kill the targeted species, but affected prey also becomes poison (and fatal) for predator as well.

In a bluebird house along one monitor’s trail in a cemetery (yes, they’re great spots to host blues with open spaces and relatively limited activity) sat five eggs never to be incubated. Mom and dad who were healthy thriving parents were both found dead in the box, yet totally intact. This pair was actually banded and well known by local bluebird enthusiasts.

How does this connect to bluebird houses and meal worms? Pesticides… in the form of worm-shaped pellets! Mole baits resemble mealworms and when used properly should be placed below ground in the mole runs. Due to the inadvertent misuse of this poison by a cemetery employee, a slow and painful death came for both parents. 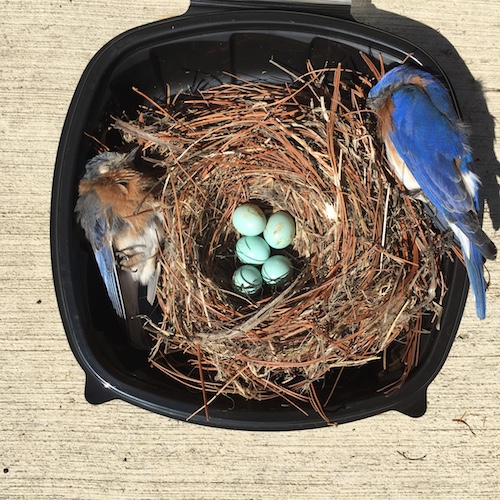 The incident occurred a few months ago. After the bait was carelessly disbursed, a sudden cold snap had the bluebirds believing these were worms. Paralyzed without a mark on them, both perished one day apart due to paralysis from the poison. Both had gone back to the bluebird house with eggs for their final breaths.

A bit dramatic? Maybe so, But step back and look at the big picture because in nature (and life) everything is connected. We’re killing ourselves, killing pollinators and killing Mother Earth. (this post was scheduled for Earth Day).

Stop using pesticides and chemicals. Manicured lawns and gardens are passe, natural and rustic are in style! If you’re trying to attract hummingbirds, butterflies or bees for instance, do not treat or spray flowers from which they draw nectar. Please be aware and mindful to help nature thrive in your patch of green… it’s for your own good!

Thanks Paula Z. of Ohio (dedicated bluebird monitor) for letting others know about this occurrence and use of the images.

“Sad occurrence in lone box in Powell Cemetery.  Both male and female EABL were killed by Talpirid mole bait.  We had extended cold snap and snow and desperate to find food, almost certainly found some “worms”.  Male found dead in nestbox on 4-13 by me.  He was in good physical shape without a mark on him.  Female was in tree making some noise when I got there (maybe in pain, who knows?).  I removed him and left her 5 eggs there.  Following day, my friend checked box and found her dead in there too.  I contacted city to find they had put down mole bait worms – almost certainly they found them, ate them or fed them to each other…  Sad.  I removed box for several days because a new pair was there checking out box same day we removed dead female – hope worms are out of the ecosystem by now.  City won’t use poison worms again; will trap if they need to kill moles.

The dead male was banded in the nest on 7-1-13 in park that is maybe quarter mile from cemetery.  This male was progeny of “Kamakazi Kent”, very aggressive male that hits me in the head at Village Green Park – no evidence of him nesting this year yet there, but he may no longer be with us as I know he nested there for past six years.”