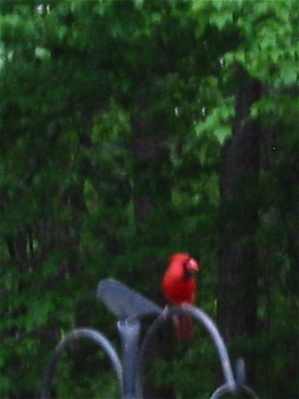 Because I lack any really decent photography equipment, the image isn’t so great, in fact I was pretending to digiscope with a pair of cheap binoculars. But that’s not the point of this blog. The bird feeder pole where this cardinal is perched sees a whole lot of activity in our back yard. From bluebirds and chickadees to titmice and woodpeckers, the four-arm bird feeder pole offers the perfect perching spot to rest and hunt.

Recently we had a semi-successful brood of bluebirds. Five babies made it out into the world, but the task of raising all five alone must have been too much for mom. Three days before these babies fledged, dad went missing. Perhaps the red-tailed hawk who hangs around, or my neighbor’s pain in the $#@ cats had gotten to him? Although I’ll never know his fate, he did leave his legacy in the three thriving juveniles. They like landing on this bird feeder pole because the mealworm dish is attached to it. They have options where to land and perch, and because the pole’s arms are at two levels, the babies can ease their way down to the dish. New males are in the area, but they’re not so kind to the babies, Mother Nature sure can be brutal at times 🙁

So here’s another pretty bad photo of dad bluebird before he disappeared, perched on the same bird feeder pole 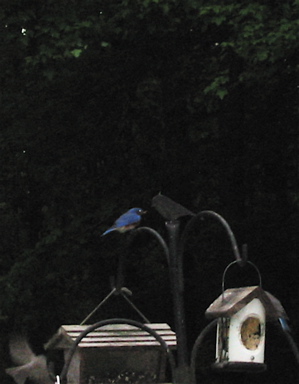 . It’s really stinks not having a decent camera because the birds in our yard are many and varied. There’s an Eastern Phoebe feeding two babies, three kinds of woodpeckers, all the usual suspects, and a thrasher who hangs around. Now, if the darn starlings would just hit the road… all would be well.