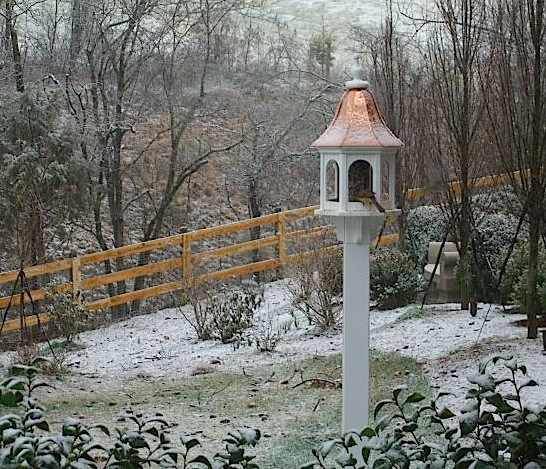 Didn’t the ground hog see his his shadow? Did he not? I always get this confused, but was sure they said it would be an early spring! Snow showers in North Georgia early this morning… what the heck?

Bluebirds are already nesting here, and other songbirds are dueling for territory and mates. Once the pairs are established, thus begins the nesting and chick-rearing process.

This landscape sure does make for a picturesque scene though. An elegant copper bird feeder set against frosted greenery, with movement and song from birds almost helps one through the dreariness of winters’ final stretch. And speaking of bird feeders and winters’ end… we can’t wait because birds have been eating us out of house and home! Never thought of wishing for bugs – but they sure would help the food supply! Sunflower, thistle, suet, peanuts and more… omg, spending a small fortune on bird food the last two months!

The early riser at this copper bird feeder hung around for a good twenty minutes before he was joined by friends. A regular at the feeder for months now, he always seems to be the first one for breakfast. Wonder if birds have a pecking order? (no pun intended)

If time afforded the opportunity to actually sit and “bird-watch” life would be so much more relaxing! Lately, the food goes out at night, so it’s there for birds first thing in the morning…. because this is usually when I get to bed. The goal is to sleep before the birds start singing!

By the way, this feeder’s actually about four years old, but it still looks the same as it did upon arrival. Now we think that’s a beautiful thing!