They all do… when placed correctly! 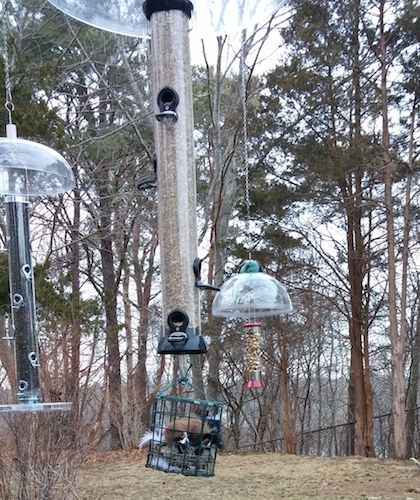 It’s just baffling to us when folks claim they can’t keep the pesky critters out of bird feeders! With about 15 different feeders at our own place, squirrels simply aren’t an issue. Yes, we feed them too and no, it’s never enough!

There’s lots of trees and lots of squirrels too- enough for a football game, but they’re relegated to their own feeders along the tree line, peanut butter slapped on a tree when it’s cold, and whatever falls on the ground from bird feeders. They may not seem too happy with the arrangement, but we are and dually so for the birds 🙂

When placing a feeder with a squirrel baffle, it’s well worth five extra minutes of time to plan your strategy. After all, it is a war, but with the right tactics… you can easily win!

One of the biggest, most important issues is the horizontal launching point! You baffle a pole so they can’t climb up, and you hang a baffle over a feeder so they can’t climb down. But none of this even matters if they can jump sideways from something to gain access. And that’s just what they’ll do, with fancy acrobatics and uber-squirrel strength… they’ll launch themselves as much as 10 feet clear over to the feeder if there’s a a good place or thing from where to jump! 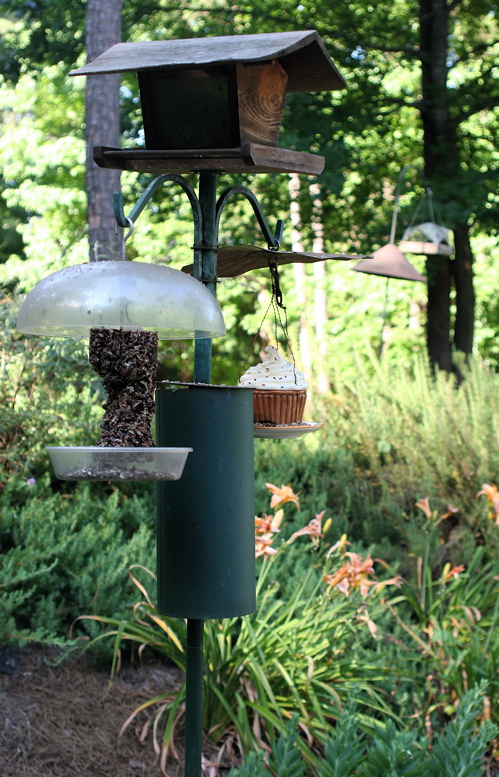 Pole mounted squirrel baffles should be placed so the bottom is at least 4 ft. from the ground. If any closer, the critters won’t even bother trying to climb – they’ll jump right up, bypassing the baffle from ground level. Even when placing a feeder that uses a hanging baffle, be sure there’s a 10 ft. clearance between the feeder and any other object such as a tree, railing, wood pile, bench… anything!

Squirrels will test your patience, and they’ll have you believing they’ve won the war. But with a one-time investment in a decent squirrel baffle, and five minutes of thought, you’ll save tons of birdseed and your nerves when dealing with furry critters raiding your feeders!