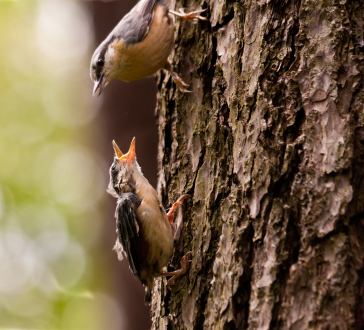 From Care 2 Causes, in observance of Earth Day:

Earth Day is right around the corner (April 22), but why not commit to loving and protecting the environment every day?

1.  Awaken Your Senses to nature all around you, even in the city. Just step outside, and nature is right there. Is it windy? What do the clouds look like? Is it sunny? What is the first bird that you hear?

3. Attack The Energy Monster: always turn off the lights when you leave a room, and replace incandescent bulbs with compact fluorescent bulbs (CFLs). They are more expensive but will last much longer.  Use the minimum amount of outdoor security lights by setting them on a timer or motion sensor so they turn off during the day.

4.  Commute Without Polluting: take mass transit or at least carpool if you can. Best of all, ride a bike! There are huge physical and fiscal benefits to biking. The obesity rate for adults is at almost 36 percent in the U.S., while countries like the Netherlands, Sweden and Germany, which promote biking as transportation, have the lowest incidence of obesity.

6.  Just Say No to paper and plastic bags. The average consumer makes 1.9 trips to the grocery store every week. If you take home two bags each trip, that’s about 200 bags a year. Even if you recycle your bags, it’s better not to use them in the first place, due to the energy used to produce those bags. Instead, carry your stuff home from the store in a reusable tote bag.

7.  Put A Cap on bottled water: roughly 50 billion plastic water bottles end up in U.S. landfills each year, which is 140 million every day. And according to the National Resources Defense Council, 40 percent of bottled water is nothing more than tap water anyway. You’ve paid taxes for your tap water, so drink it! Head out to buy some refillable water bottles.

8.  Buy Locally Produced Food. When you do, you are helping reduce the pollutions and depletion of resources associated with the transportation and packaging of food. On average, domestically grown produce sold in conventional supermarkets has traveled some 1,500 miles from farm to table. Not to mention, it’s probably been treated with fungicides so that it can be stored.

9.  Weigh Your Waste. I’ve done this and it’s scary to see how much my family accumulates each week. Weigh on a bathroom scale every bag of garbage you create before you take it out. Do this for a week, and multiply by 52 to get a rough estimate of how much waste you produce in a year. Then figure out how you can cut your waste production!

10. Avoid The “Print” Button. It’s an obvious one – but really, think twice before printing from the computer. You can read most documents and magazines online, and you can pay many bills via the web these days. When you do print, use both sides of your paper as much as possible.