Just when you thought this is it… a family of bluebirds or chickadees- nature might play a most wicked April Fool’s joke! Except it’s not funny and most times fatal to nestlings.

Should you become inquisitive and brave enough to monitor the nest inside your birdhouse (yes, it’s recommended) and spot an egg that’s different in size and/or color- it’s likely the wicked antics of a cowbird. 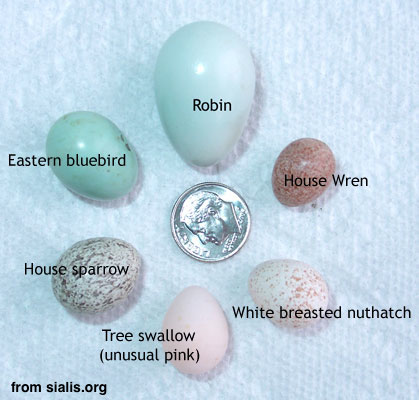 Talk about shirking responsibilities! Known as parasitic eggs, because Mom will deposit her egg in the nest of another bird, typically with at least 2 eggs already laid. She then flies off leaving full responsibility for upbringing to the unsuspecting parents.

Imagine trying to raise a baby who has grown twice the size of yourself. Just picture that for a moment. Other nestlings in the group barely have a chance at survival as the large cowbird baby hogs most of the food. This actually happens often- to wrens, bluebirds, chickadees, tree swallows and others. Some birds recognize the foreign egg and may abandon the nest or remove the egg. Most birds are unaware an imposter is looming, and end up raising the ridiculously large intruder to the detriment of their own nestlings.

It’s the natural instinct to thrive, though cowbirds won’t be bothered raising their own. Also considered nomadic, they tend to follow livestock herds for the abundant insects, their habitat being open grasslands and meadows which are far away from most nesting spots.

Cowbirds are native (unlike house sparrows or starlings) and are protected under the Migratory Bird Treaty, thus it’s illegal in most cases to remove the egg. Sometimes permits are issued to bluebird monitors and others when circumstances warrant.  This is just one good reason for using correctly proportioned birdhouses. Nix the houses with really large entries, they do no favors to the birds you’re trying to attract. Avoid feeding birdseed containing millet as the tiny round seed tends to attract cowbirds. Most birds will flick this filler seed out of your feeder and onto the ground anyway.

A bit smaller than blackbirds, cowbirds have brown heads. To view they gray female or juvenile cowbirds- check sialis.org for more informtion.

And should you like to become a really, really good landlord- monitoring nests actually helps backyard birds thrive. Head over to Sialis.org where you’ll find a wealth of information and any question answered on hosting bluebirds and all native cavity nesting birds (those who use birdhouses).