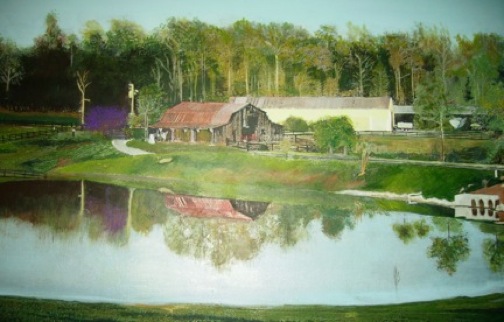 Here’s a picture (actually a painting I did several years ago) of the back 40 of the equestrian center where I work part-time. It’s situated on 400 acres, about one hour northwest of Atlanta. As you can very well imagine, it’s prime wildlife habitat. We have some good-and not so good inhabitants. The latter is being inundated with house sparrows, and several coyotes driven there by development.

This blog was supposed to be on bird cams, and I sure do wish we had a few of them scattered around the place! Today there was an amazing occurrence and I missed it, missed it I tell ya… a once in a lifetime opportunity!

A boarder was grazing her horse near this very pond earlier today. She in fact phoned me on the way home to tell me what had happened. By the tone in her voice I could tell it was something out of the ordinary… “a Bald Eagle” she said. It had been spotted stealing eggs from a nest. “Huge” she said, with a wingspan wider than the length of her horse. She said the bright white head was unmistakable, and it must have been raiding a crow’s nest as several were trying to dive-bomb and chase him away, still carefully keeping a distance.

We can only hope this Bald Eagle thinks the diggs are pretty decent around here, and decides to take up permanent residence at Moonlight Stables. Sorry there’s no photo… we’ll definitely be on the look-out though!